From autonomous archive
Jump to navigation Jump to search 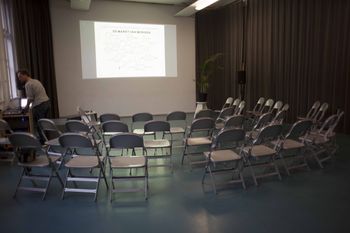 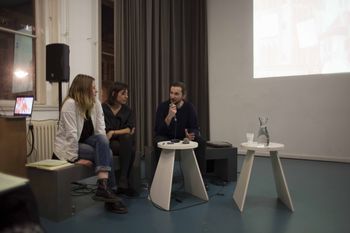 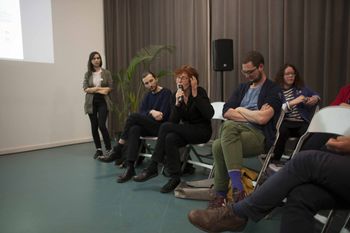 What do small, independent projects have to overcome in order to function and exist? We wish to illuminate the efforts taken by individuals in the cultural scene of Rotterdam that have challenged the problematic relationship between self-governance in the face of the law. How do these pragmatic examples, that resist existing policies of “cultural-production”, feed the question of co-autonomy?

We are happy to have Frederic Van de Velde from WORM Pirate Bay, Maurice Specht and Joke der Zwaard from Leeszaal, Kamiel Verschuren from NAC Foundation and Annet Van Otterloo from Stichting Freehouse as our speakers.

The event will start at 7 pm with a small presentation from each speaker, followed by an open discussion in which you are also more than welcome to participate.

Frederic is one of the founders of the Pirate Bay Archive, a no-fee lending archive with an online database and a screening room based in Worm. The archive is an online and offline collection of films, books, zines, music and many other cultural (and sub-cultural) materials. Users can browse the online archive and get a notification when the requested item is available. The archive hosts a tangible assortment of materials, often produced in the city of Rotterdam, as well as items that are relevant for an international audience.

Maurice Specht and Joke der Zwaard from Leeszaal, Maurice and Joke are initiators of the Leeszaal the reading room located in Rotterdam West. The Leeszal is a public working space and library maintained by volunteers. The library has a relevant value for the neighborhood which can participate and be involved in the project. In the library, everybody can take books, return them or keep them. This project is a self-organized space for learning and working, giving free access to books, allowing people to bring old re-usable volumes and maintaining a cultural program centered on literature, poetry and public debate.

Annet is the spokesperson from Stichting Freehouse, a co-operative that promotes and supports a networks of local services and businesses from the Afrikaanderwijk neighborhood. The organization has created a catering service, cleaning business, fashion and textile studio by promoting and stimulating the skills of local residents. The project is lead by the artist Jeanne Van Heeswijk and was originally centered on researching the relationship between production and public space. The programme has now been taken over by a co-operative of people and represents an infrastructure that facilitates access to the the labour market while contributing to the local economy of the neighborhood.

Notes from the introduction to the talk[edit]

Welcome to our first talk, that we entitled Anomalous Institutions. We use this title to emphasize the importance of the projects which our guests are representing, for this city, but also for cultural production and sharing in general. Anomalous Institutions can be viewed as hybrids, spaces that experiment with their existance in gray areas, or in places in between autonomy and institulization. What the projects you will be hearing more about today have in common is the desire to stress and question certain given standards of cultural production, but also the role of an institution within a community. I’m very happy that you all came here to listen to us. This is the first event we are organizing as part of Rotterdam Cultural Histories with our Temporary Autonomous Bureau.

The Temporary Autonomous Bureau is a meeting point for research and debate growing from the context of The Autonomous Archive and the publication 'A Bed, a Chair and a Table', two projects that talk about the history of the Poortgebouw. The project is a response to the invitation of Anke Bangma to introduce the Poortgebouw at TENT and Witte de With in the context of the Rotterdam Cultural Histories series.

In this occasion we would like to give space to four guests that will narrate their experiences and stories of self-organized cultural platforms. Unfortunately, Kamiel from Nac Foundation was also supposed to join us tonight, but he couldn’t make it because he is sick.

We find very important to spend time bringing light to those efforts that are close to us, as Poortgebouw inhabitants, students of the Piet Zwart, temporary or permanent citizens of Rotterdam. Starting from the territory of this city, we can discuss about supporting and getting involved directly in initiatives that challenge the mainstream and bring real value to the communities that surround them, value that goes further than monetary. Going further, we can then investigate the concepts that arise from such initiatives at a much larger scale, and think about implementing changes that can benefit everyone.

For me, personally, an intriguing point from which to investigate these projects is their critical position in relation to the city: in different ways, these projects are able to give a strong critique to the mainstream method of knowledge creation, moving beyond the habit of turning culture into a commodity. At the same time, they exist as established institutions, or receive institutional support, a sign that a dialogue and a process of negotiation is maybe possible to create alternative initiatives within the policies of this city.

From the Pirate Bay archive, which gives free access to physical “liberated” items, as freed from charging money to their public and copyright fees, and believe that everything is for everyone and copyright is the biggest killer of creativity. The Leeszal “citizen Library” which offers an open space for studying and freely using a vast amount of books, and runs on a volunteer basis, bringing the whole community together. And in the end the project Stichting Freehouse, a co-operative which challenges traditional models for connecting and supporting local initiatives and businesses in the neighborhood of Afrikanderwijk.

When we selected these projects, we had a couple of points that we wanted to highlight:

- which are the steps of negotiation with the institution that supported you?

- we asked to bring some documentation of their history of self-organisation, and co-operation with Municipality or others.

- we also asked if they encounter difficulties in proposing their project in the beginning, and we are wishing they will find here the time and space to also reveal those details to us, tonight.

Explain structure of the evening: Each speaker has time to present their project freely. Afterwards, we are going to have an open discussion, in which we welcome everyone to join.

I think the best thing to do now is to give the speech to the first speaker.

Questions for the end:

How do you maintain a certain degree of openness and personal agency in your project?

How do you collaborate with the municipality, the laws of the neighborhood and how did they shape ultimately the project?

do you think the monopoly of cultural institutions decides the parameters of how you make things? Could you make an example of it? how do you get outside support - is it difficult to get the community involved, is it difficult to find financial support and to keep developing your project over time

What about temporality? Would you consider your project an experiment, and from which degree we can consider a project effective in time and for the community? if the creation of knowledge was always an elitist practice, what’s the difference now, considering the city and these project?

culture has become a commodity (How, then, can the commodity status of so many of these phenomena be reconciled with their special character?)

how contemporary processes of economic globalization relate to localities and cultural forms.

dilemmas arising in the nexus between capitalist globalization, local political-economic developments and the evolution of cultural meanings and aesthetic values.

“The bland homogeneity that goes with pure commodification erases monopoly advantages. Cultural products become no different from commodities in general.”